Currently, Kitselas has an Agreement in Principle (AIP) in place. The Kitselas People voted to ratify the AIP in 2013 and the Kitselas Government signed it in August 2015.

The AIP provides a framework for what the Kitselas Treaty will look like, but the AIP is not legally binding.

The AIP is like a rough draft of the Treaty that is being tweaked and finalized through ongoing negotiations. The final draft will result in the Kitselas First Nations Treaty. 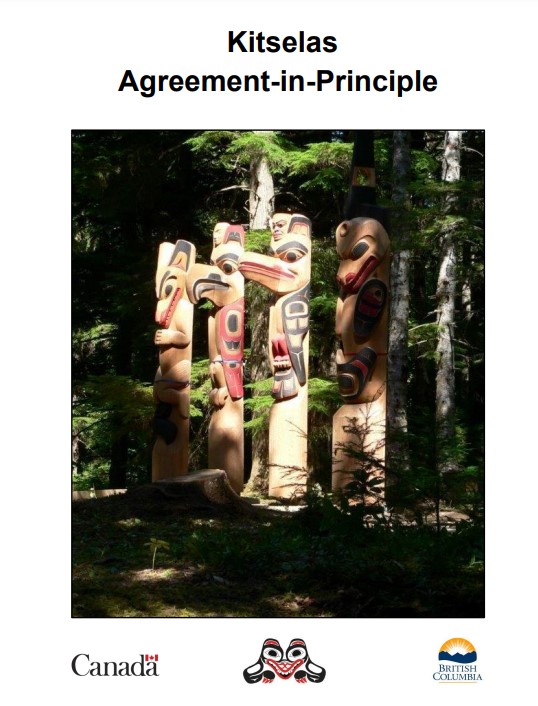 Read the Agreement In Principle

Kitselas is currently at Stage 5 of the Treaty Process

Learn more About the Treaty Process

Stage 4 - Negotiation of an Agreement-in-Principle (AIP)

Negotiations at this stage will form the basis of the Treaty. The AIP also lays the groundwork for the implementation of the treaty Final Agreement negotiations. In 2013, Kitselas voted in favour of the AIP.

Stage 5 - Negotiation to Finalize a Treaty

Current Stage
The Treaty that is concluded at this stage will formalize the relationship between all parties, any legal or technical issues are resolved and any outstanding items are re-opened. At the completion of this stage, a final agreement will be signed that is legally binding.

Stage 6 - Implementation of a Treaty

If the Kitselas people vote ‘Yes’ for the Treaty, the plans to implement the treaty are put into effect or phased in as agreed during this stage.

An initial meeting is held to exchange information, discuss research, identify main issues of concern and determine the readiness of all parties to begin negotiations.

This is the agreed-upon agenda that identifies the issues to be negotiated, the goals of the negotiation process and a timetable for negotiations.